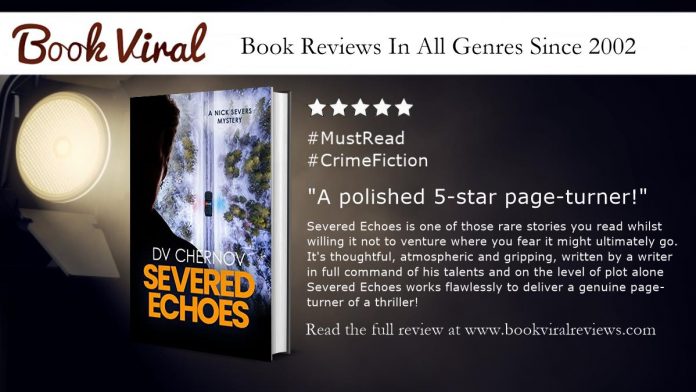 Book Viral had this to say about book #1 of Nick Severs Mysteries:

Chernov crafts an intricate and intelligent plot. Thoughtful, atmospheric and gripping. A disturbing narrative which reminds us why the best crime thrillers never age.

If a crime thriller is to be convincing it has to feel utterly plausible and yet far too many releases in the genre prove disappointing. It’s for this reason that Chernov’s novel stands out. A vivid and insightful writer he has an acerbic eye for the pressures and poignancies of his characters which combined with his ability to craft an intricate and intelligent plot rapidly draws his readers in.

Severed Echoes is one of those rare stories you read whilst willing it not to venture where you fear it might ultimately go. It’s thoughtful, atmospheric and gripping, written by a writer in full command of his talents and on the level of plot alone Severed Echoes works flawlessly to deliver a genuine page-turner.

Everything Chernov writes is storytelling sinew and it’s rare to find extraneous detail that doesn’t move his narrative forward as he takes the time to favoured tropes and conventions of the genre and fine-tunes them to deliver a disturbing narrative which reminds us why the best crime thrillers never age.

There’s no unnecessary glut of blood and hysteria, it isn’t needed, with the continuous threat existing in a predatory intelligence as Chernov builds the tension in sure calculating steps whilst leveraging the interplay between Nick and Claire.

With genuine panache, Chernov gets Nick’s persona just right with attention to detail, dialogue and subtleties of character that makes him utterly convincing whilst Claire has just the right blend of determination and vulnerability as we hurtle towards a crushing reveal and a superbly pitched denouement.

Markedly different from Chernov’s ‘Commissar’, Severed Echoes is a polished and entertaining 5-star page-turner which is guaranteed to leave Chernov’s fans eager for another book and is unreservedly recommended!

I am excited to share that Severed Echoes (Book 1 of Nick Severs Mysteries) is now available as an audiobook edition. Narrated by 5-time...

Book one of Nick Severs Mysteries is now available in print and as an eBook. In the small town of Pine Lake, Colorado, Lisa...

Excited to have Severed Echoes reviewed by Kirkus: "A good eye for the procedural... A strong sense of place... Severs makes an impressive first...

Interview with the Historical Novel Society

“A taut mystery and espionage story. Not only is Commissar an exciting read, it’s also an excellent introduction to the struggles of the nascent Soviet...